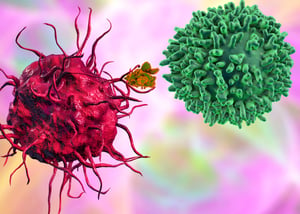 CD4+ T lymphocytes consist of naïve, antigen-specific memory, and memory-phenotype (MP) cell compartments at homeostasis. We recently showed that MP cells exert innate-like effector function during host defense, but whether MP CD4+ T cells are functionally heterogeneous and, if so, what signals specify the differentiation of MP cell subpopulations under homeostatic conditions is still unclear. Here we characterize MP lymphocytes as consisting of T-bethigh, T-betlow, and T-bet− subsets, with innate, Th1-like effector activity exclusively associated with T-bethigh cells. We further show that the latter population depends on IL-12 produced by CD8α+ type 1 dendritic cells (DC1) for its differentiation. Finally, our data demonstrate that this tonic IL-12 production requires TLR-MyD88 signaling independent of foreign agonists, and is further enhanced by CD40-CD40L interactions between DC1 and CD4+ T lymphocytes. We propose that optimal differentiation of T-bethigh MP lymphocytes at homeostasis is driven by self-recognition signals at both the DC and Tcell levels.