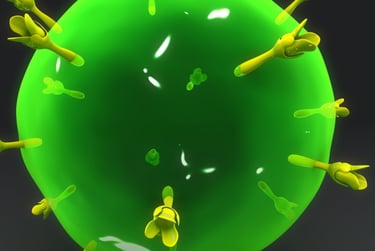 The scavenger receptor CD163 is highly expressed in macrophages in sites of chronic inflammation where it has a not yet defined role. Here we have investigated development of collagen-induced arthritis (CIA) and collagen antibody-induced arthritis (CAIA) in CD163-deficient C57BL/6 mice. Compared to wild-type mice, the CIA in CD163-deficient mice had a several-fold higher arthritis score with early onset, prolonged disease and strongly enhanced progression. Further, the serum anti-collagen antibody isotypes as well as the cytokine profiles and T cell markers in the inflamed joints revealed that CD163-deficient mice after 52 days had a predominant Th2 response in opposition to a predominant Th1 response in CD163+/+ mice. Less difference in disease severity between the CD163+/+ and CD163−/− mice was seen in the CAIA model that to a large extent induces arthritis independently of T-cell response and endogenous Th1/Th2 balance. In conclusion, the present set of data points on a novel strong anti-inflammatory role of CD163.